The intrigue began with a sentence: “She always wore a veil over her face, never answered the door or spoke to outsiders.” We found it on p.12  in the memoir of a long gone Beverly Hills police chief, the book full of tattle tales about the rich and famous.

He added some juicy tidbits: the recluse lived in a mansion on a hill and left much of her fortune to her pets. And the reason she was hiding? Rumor had it, “…she had been jilted in love in her youth and had chosen this way of retiring from life, years before her death.”

A face-hiding, monied, mansion dwelling dame with a tragic love story? We were hooked. Wanted to know more, but we had a problem. There were lots of pronouns in the book’s prose, but no names. No address, either, and that meant no clues as to who this “leave me alone” rich lady could be. And why would she be wearing a veil, was she horribly disfigured? Burned? Lovesick… just plain crazy? We had to know more.

We checked police files, talked with local historians, scoured library archives – nothing. No one seemed to know anything about this mysterious madame in the manor.

A Google search for “rich lady wears veil in old Beverly Hills” came up with a big fat zero. All we found were a few weird 1930s séance photos featuring badly superimposed veiled ghosts. Talk about a dead-end. We marked the case with a U, for Unsolvable.

And then, a few years after we’d published our book, Beverly Hills Confidential: A Century of Stars, Scandals and Murders, we caught a break. We were about to find out just who that reclusive millionairess was, the one who lived at the top of a hill, hiding from the world behind a heavy black veil.

This is the picture that started the ball rolling. My co-author, Clark Fogg, lead investigator of the Beverly Hills Crime Lab, found it, along with several others, in an old folder that had been destined for the dump. But something made him pull out this exact file from the pile. Perhaps the story inside did indeed want to be told.

The next photo featured a grand staircase, they sure don’t build them like that these days. Just look at that burled wood, carefully carved balustrade, and the bed… uh, there was a bed in the hallway? And an old-fashioned radio? This was rather odd.

The next photo threw us for a bigger loop. Same hallway, different angle, same bed. Only this time, there was a woman on the bed. A dead woman. In a grand mansion. Wait, could this be the mystery mansion lady we’d been looking for?

Next, we found a photo of a suicide note. The author had written that she was a “black sheep,” soon to become a “white sheep,” and that part of the reason she was killing herself, was because of a lover she “couldn’t live without.” One of us had the bright idea to turn over the photo. We saw a name, Margaret Ann Keith, dead of chloroform asphyxiation, April 28, 1933. Finally, we had a hot clue.

Time to hit the Google machine again. We entered the name, this time, pay dirt in the form of an old Milwaukee Sentinel article dated Oct. 14,1934: “Killed Herself Rather Than Show Her Face… Mystery Millionairess Hid Behind Impenetrable Veils Even While Sleeping.” The author wrote that wearing a veil “was an incredibly unfeminine decision,” that led many to wonder if perhaps Miss Keith had a horrible disfigurement. All these years later, and here we were now, wondering the same thing. 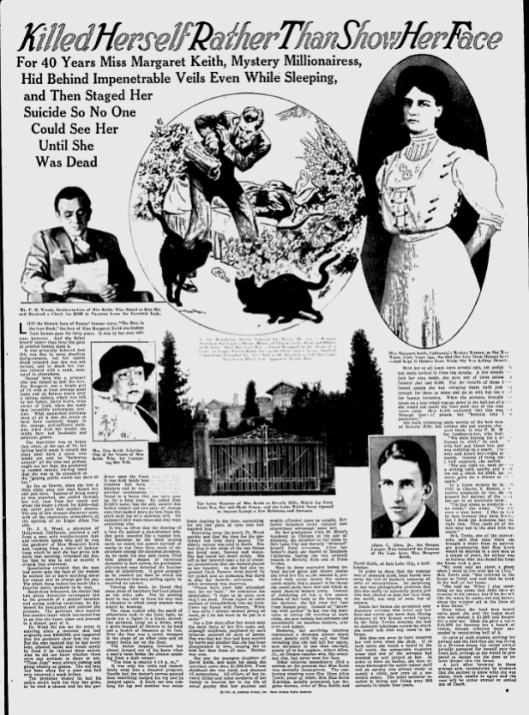 The article breathlessly detailed highlights of Miss Keith’s sad life and increasingly odd behavior. She’d been a troubled child – rocking herself endlessly until she’d worn off patches of hair from the back of her head. Her mother deserted the family when Margaret was very young. And when Margaret finally graduated from one of the many private schools she’d been shuttled through, she returned home to Park City Utah for a while. But then her rich father (part owner of Utah’s Silver King Mine) died, and much of his fortune was bequeathed to Margaret. She took her new riches and high tailed it to California, where she built not one, but two mansions.

Margaret Keith’s first palatial estate was in Palos Verdes, but after a few years, she was convinced it was haunted, telling her niece who’d come to visit that a spirit named John lived inside her walls. “When I play something on the piano John likes, he remains in the corner, but if he doesn’t like the music he comes out and dances along the window sill in the form of a blue flame.”

She abandoned that mansion with the ocean view, and built a newer, larger manor in Beverly Hills on the prestigious Alpine Drive.

Margaret’s mental health deteriorated even more. She refused visitors, began wearing that veil day and night, and would fire any staff member on the spot if she thought they were trying to sneak a peek at her. Then she started sleeping in the hallway of her 30-room mansion, telling the gardener she’d be able to “escape faster in case the hills went up in flames.” The maid was ordered to cover the windows with dark blankets.

What was it that had terrified Margaret Keith so, and filled her with demons and dread?

We needed more information, and found it while researching her father, the mining magnate. This time we struck gold. Margaret Keith was indeed hiding not just her looks, but a dark, dastardly secret, one far more dreadful than we ever could have imagined.

Margaret’s parents, before they had their own children, adopted a son named David from a dying friend. David Keith Sr. gave the lad his surname and treated him like his own flesh and blood, making David Jr. a full heir just like the other children. Margaret was the baby of the family, born in 1884. David Jr. was 18 years old at the time.

At some point during Margaret’s youth, after her parents divorced, with no mother in the home to guide her, a tragic scandal unfolded. Young Margaret had been impregnated. On April 10, 1893 Margaret gave birth to a baby daughter. The baby’s father? It was Margaret’s adopted brother, David Keith, Jr.

Now here’s where it gets a bit tricky. All the birth records we found show that Margaret was born April 16, 1884, which means she would have been 9 when she gave birth. 9 years old ?!?! Medically speaking, it’s possible, but this was a shocker, if it was even true.

We found a discrepancy about her age in some court record information. Apparently Margaret’s father filed legal documents to disown his adopted son. David Sr. wrote, “… a baby girl was born to my youngest daughter, Margaret Keith. As a timid, unsophisticated girl of 16 years, she fell victim to my adopted son’s illicit love. Until he reached manhood, David proved a loyal son – he then committed a dishonorable deed, from which my heart has known no forgiveness.” David Sr. cut David Jr. out of his will, and his heart, forever.

So was Margaret 16 or 9 when she gave birth? Lies were being told, no doubt, including a whopper of a fib to Margaret, the young mother. They told her the baby had died, when in fact it was whisked off to a secret adoption.

This baby and how it came to be born, was no doubt the heartbreaking secret Margaret lived with for the rest of her life, a secret that made her feel like a black sheep. No wonder she went crazy.

It felt wrong to publish the photo of Margaret dead in the bed. She had given explicit instructions for her burial: no one was to see her face, “I didn’t care to be Exhibit A when alive and I don’t want to be gaped at when dead.” But know this, she wasn’t disfigured, or burned, and wasn’t ugly. Her skin was smooth and pale, her features much like the photos of her when she was young. A few wisps of gray hair framed her face.

We couldn’t help but wonder; if she would have known that the baby lived, was adopted, and named Myrtle Mae, would things have turned out differently? We tucked the photo away after one last glance. She appeared to be almost angelic, her demons finally slain. Rest in peace, Margaret Keith.

1 thought on “The Veiled Millionairess”